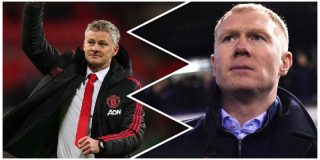 Paul Scholes resigned as Oldham Athletic boss just 31 days after taking the job, and Ole Gunnar Solskjaer has been quick to jump to his former teammate’s support.

As noted in Simon Stone’s tweets below, Scholes has explained his decision and hinted at the possibility that he didn’t have the control he expected as manager.

Something fishy has obviously gone down at Oldham. It looks like something has gone on behind the scenes, which Scholes mislead about how much control he would have as manager.

Paul Scholes 1/3 “It’s is with great regret I have decided to leave the club with immediate effect. I hoped to at the very least, see out my initial term of 18 months as the manager.

Paul Scholes 2/3: “The fans, players, my friends + family all knew how proud + excited I was to take this role. In short period since I took on role it unfortunately became clear I would not be able to operate as I intended and was led to believe prior to taking on the role.”

Paul Scholes 3/3: “I wish the fans, the players and the staff – who have been tremendous – all the best for the rest of the season and will continue to watch and support the club as a fan.”

It puts a black mark on his early managerial career but perhaps Scholes is right to walk if promises were broken and he felt managing the side would be more difficult under the owner’s terms?

A supporter of Oldham growing up, Scholes did seem gutted when announcing he was walking from the job but Solskjaer is willing to lend a shoulder to an old friend.

Ole on Scholes: “Paul has got his reasons why he left. That is just management. He is invited here if he wants to have a little chat about it.”

It’s a shame things didn’t work out for Scholes but this might not be the end of his career as a manager. If he wants to dive back in there will be an array of clubs willing to take him on.