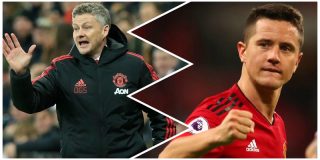 Prior to Ole Gunnar Solskjaer’s Friday press conference, the Manchester United manager spoke to ManUtd.com to give a brief injury update on his squad.

It’s mostly positive with Jesse Lingard and Ander Herrera returning to full training, with Phil Jones back in contention to start United’s FA Cup quarter-final against Wolves on Saturday.

The tie represents a great opportunity for a day out at Wembley, and Solskjaer will want to end his first campaign as United manager with some silverware. They’re already in contention for a top four finish and through the quarter-finals of the Champions League.

Solskjaer adds that Romelu Lukaku has a sore fit and that youngster Mason Greenwood could also be missing due to illness.

“We’re still getting players back, they’ve been training better this week,” Solskjaer told the official United app, as quoted by the Manchester Evening News.

“Jesse, Ander, they’ve been training. Romelu got a sore foot so he’ll be assessed this morning to see if he can join in.

“Phil Jones is back, so we’re looking stronger. Mason [Greenwood] has been ill, so he’s not trained this week. He might be training this morning, so let’s see how it is.”

Wolves will be difficult opponents this weekend. It’s not often they’re in with a chance of winning trophies, so you can be sure Nuno Espirito Santo will be driving his players to do so, starting with a shock win over United this weekend.

Herrera will be a key addition to the midfield and Lingard should get back into the team immediately.

We’ll have more updates from the press conference soon.