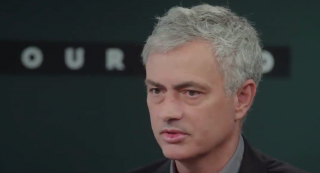 The Champions League quarter-finals draw is to take place this afternoon so everyone will be picking their preferred ties in the lead up. We will have coverage from the draw on the blog and social media (@StrettyNews), so make sure you are kept in the loop.

Former Manchester United manager José Mourinho jumped in on the act, claiming he would like to see the English teams to face each other.

Speaking to RT, Mourinho said: “I would like English teams to play against each other, without any kind of preference. But I would do two matches between English teams, which would mean two teams would be in the semi-finals.

“I think if the draw gives something like Manchester City versus Manchester United, or Tottenham against Liverpool, for example, I think would be absolutely fantastic matches.”

Mourinho doesn’t quite see eye-to-eye with City boss Pep Guardiola, so we’d be hoping the Portuguese coach would support his former team if such a matchup did happen, even if he was sacked in December.

United can also draw Ajax, Porto, Barcelona and Juventus, as well as the Premier League teams left in the competition.

We have no real preference on the tie but the easiest draw would be FC Porto, another one of Mourinho’s former clubs, who he would like to see get Ajax in the quarter-finals.

Speaking about other teams in the draw, he added: “My second choice would be not by tactical or emotional reasons but by what I think would be fantastic extra motivation I would do Ajax versus Porto, as that would mean one of them reach the semi-finals. They are doing so, so well during the competition that I think it would be amazing for one of them.

“I wouldn’t like Juventus against Barcelona because it would be something really special Barcelona against Juventus in a possible final or semi-final. Two great teams that are not being successful in the Champions League for a few years, of course Juventus so much more than Barcelona.”

Messi and Ronaldo equally blessed and cursed to be playing in same generation, says Jose Mourinho

Like United, Juve pulled off a remarkable comeback in the Round of 16 thanks to a Cristiano Ronaldo hat-trick in the second leg to overturn a two-goal deficit against Atletico Madrid.