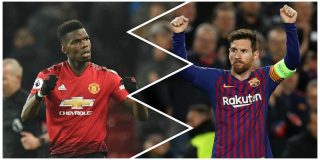 The Champions League draw for the quarter-finals took place this morning in Switzerland and Manchester United face a tricky test against Barcelona.

This is the first time since 2009 that four English teams – United, Liverpool, Tottenham, City — have gone this far in the tournament, with at least one certain to make the semi-finals with Spurs drawn against Pep Guardiola’s men.

Caretaker manager Ole Gunnar Solskjaer previewed the draw at his press conference this morning, as quoted by the Manchester Evening News: “Definitely, we’re happy to be through, so many good teams anyway so we’ll know in a couple of hours time who we’re gonna play against and it’s been a nice couple of days watching and relaxing the other games. I don’t really mind who we gonna play because it’s gonna be tough anyway if you’re gonna win it.”

We didn’t fear anyone going into the draw because we just overcame PSG from a two-goal deficit. And, the same mental state will hopefully be intact when we take on one of the world’s greatest clubs.

This is what Champions League football is about… United may go into the tie as underdogs, but Solskjaer will ensure they’re in with a chance until the very end.

Rest of the draw

Here are some of the best tweets in relation to Manchester United vs Barcelona.

Ole Gunnar Solskjaer, 20 years on from 1999, returns to the Nou Camp in the Champions League! 🔴 pic.twitter.com/eiAjmfFY1u

Manchester United vs Barcelona. Turns phone off. Here we go…bring on the Catalans by the score.

Manchester United drawn as the away team first, however UEFA procedure means that this will be reversed. United will play the first leg at Old Trafford.

Ole at the Camp Nou. Had to be

So to win the CL, United will have beaten (deep breath)….Juventus (group), PSG, Barcelona, Liverpool and Man City…

Starting to think Ole isn’t very lucky when it comes to cup draws!…

Name on the trophy!!! #UCLdraw #mufc