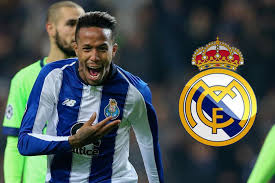 Real Madrid have confirmed the signing of FC Porto defender Eder Militao, who had been heavily linked with a move to Manchester United.

The Brazilian becomes Zinedine Zidane’s first signing in his second spell in charge and will join Los Blancos on a six-year deal this summer.

A statement on the Real Madrid website read, as per The Independent: “Real Madrid and Porto have agreed the transfer of the player Eder Miliato, who will be linked with the club during the next six six seasons, until Junes 30, 2025.”

The Sun reported yesterday that United would miss out on the defender, stating he was headed to Real Madrid.

All this means for United is there’s one less target to go for this summer. The club will have a list, hopefully written by Ole Gunnar Solskjaer, and the board or whoever is in charge will work on recruiting those players from top to bottom.

Not every player on the list is certain to sign as we seen last summer and it can be difficult for managers if the club is unable to attract his prime targets.

There is little to suggest Miliato was a prime target for United, with other names doing the rounds such as Toby Alderweireld and Kalidou Koulibaly.

Miliato will make the big jump to Real Madrid next season and everyone will be intrigued to see how he hopes at the highest level.