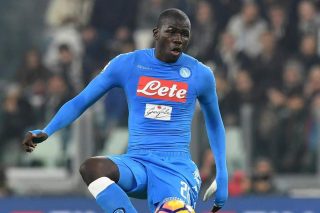 According to a report in The Sun, cited by The Metro, Ole Gunnar Solskjaer has dropped plans initially set by José Mourinho to sign Napoli defender Kalidou Koulibaly as he wants to focus on attacking additions to his squad.

That’s a mighty claim with the majority of Reds hoping to see a world-class defender signed this summer, and the Senegal international would top many of their lists.

Solskjaer is set to be named manager on a full-time basis this summer after turning United’s season around as caretaker boss after an astonishing three months in the hot seat.

Former manager Mourinho made it clear last summer he wanted to bring in defensive reinforcements. As a result, United were continuously linked with defenders such as Diego Godin, Jerome Boateng, Toby Alderwerield and Harry Maguire.

Then before the new year, ESPN claimed Manchester United were prepared to wait until the summer to make a move for Koulibaly after it became clear Napoli would not sell midway through the season.

There had been speculation doing the rounds that United were willing to make Koulibaly the most expensive defender in history, smashing the £75 million fee Liverpool paid for then-Southampton defender Virgil van Dijk.

It now looks like United will instead prioritise a move for Borussia Dortmund sensation Jadon Sancho to fill the void on the right, as reported by The Independent.

While Solskjaer has seen United’s defence improve since his arrival, finally settling on a centre-back pairing of Chris Smallig and Victor Lindelof, but there is still room for improvement.

United must look to the standard of top European teams like Juventus, who win their domestic league each season, and take note of how important it is to build from the back.

It’s not as if Eric Bailly, Phil Jones and Marcos Rojo are going to come back into the team and transform into world beaters.