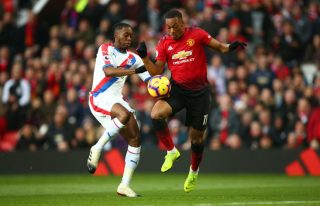 According to The Sun, Manchester United are stepping up their interest in £40 million-rated Crystal Palace full-back Aaron Wan-Bissaka.

The report claims United have sent scouts to watch the 21-year-old a number of times this season and with Antonio Valencia leaving at the end of the season, Wan-Bissaka looks like a potential replacement.

Ashley Young, who starts most weeks at right-back is 33-years-old and shouldn’t feature as often next term, but there’s also a younger alternative in Diogo Dalot after several impressive displays in defence and midfield.

So, why are United looking to sign another young full-back when we’ve already got Dalot on our books?

Only caretaker manager Ole Gunnar Solskjaer knows but he does fancy the Portuguese starlet as a winger, though he’s yet to have a proper run in that role for the Reds…

Wan-Bissaka has been phenomenal for Palace this season, winning the club’s player of the month award three times in a row and earning plaudits from anyone that has paid attention to Roy Hodgson’s side.

It will come as a blow to Wan-Bissaka that he missed out on England’s latest senior squad.

Rather disappointing for Aaron Wan-Bissaka, James Ward-Prowse and Conor Coady, that… will be interesting to hear Southgate’s reasoning on his latest England senior squad

United are likely to face competition for Wan-Bissaka’s signature, with Arsenal and Manchester City also said to be in the running, along with Bayern Munich and Borussia Dortmund.

This story is worth keeping an eye on…