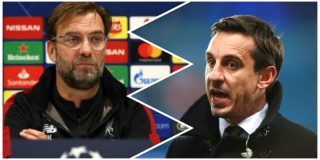 Speaking to the press on Tuesday, Jurgen Klopp seemed a little rattled ahead of Liverpool’s big game against Bayern Munich in the Champions League tonight.

The German did not react well to a question about whether or not his side should prioritise the Premier League title race.

Liverpool’s squad depth is some way off Manchester City and in these final few months injuries can slip in and have a disastrous effect to a team’s title race, though we wouldn’t call it ‘disastrous’ this time round.

Sky Sports pundit and former Manchester United captain Gary Neville feels Liverpool should put all of their eggs in one basket by trying to win their first league title in 29-years, putting an end to that long wait.

But when this was put to Klopp, he was not at all happy, suggesting that a former United player now working within the media was starting an agenda now driven by the media.

Neil Jones from Goal picked up on Klopp’s response to the question.

Klopp asked about going out of CL to aid PL chances.

“I don’t think any other manager in the world would be asked this question when they are playing a CL game. The pundits come from Manchester United and start this thing! The whole world is watching tomorrow night!” #LFC

Moreover, I don’t actually think Neville has set out to rattle the Liverpool manager. His view stems from Klopp’s men going for both trophies and running the risk of winning none. There will be more demanded of players and more games could mean more injuries, which you’ve got to admit plays into City’s hands as far as the Premier League is concerned.

Pep Guardiola’s side could probably deal with the situation better and last night booked their place in the Champions League quarter-finals.