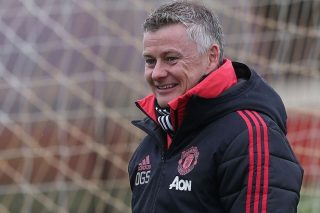 Rather than throw his players under the bus after their defeat at Arsenal on Sunday, Ole Gunnar Solskjaer took it on the chin instead of using the excuse book.

That’s according to ESPN pundit Shaka Hislop, who feels Solskjaer could have blamed the loss on injuries to key players.

Nemanja Matic, Paul Pogba and Anthony Martial all returned to the matchday squad but United were still missing a few.

And considering we never really won the midfield battle, you could say Ander Herrera was a big loss, as he is when out of any big game.

It was also Solskjaer’s first Premier League defeat as United boss. The first goal saw a rare mistake by David de Gea and the second came from a soft penalty, eventually scored by Pierre-Emerick Aubameyang.

“[Arsenal] got the goal that they wanted through Granit Xhaka and then I thought they played well enough to get the three points,” Hislop told ESPN FC, as quoted by the Daily Star.

“I don’t think that was a penalty in a month of Sundays, but they great the rub of the break.

“I don’t think the referee himself covered himself in glory throughout the game, not just with that once incident.

“But as far as Manchester United goes, let me just say I’m liking Ole Gunnar Solskjaer more and more, he had every reason and every opportunity to maybe throw some of his players under the bus – he didn’t.

“He could have blamed it on injuries and having to call on teenagers – he didn’t. If there was one time that was a perfect opportunity to play against Manchester United, it was this weekend.

“The week after they do what they did in Paris, and even so, Lukaku not great, Rashford wasn’t himself, I don’t think Pogba took control of the gane in the way you expect him to, nor did Matic and David de gea wasn’t himself either.

“And yet still you create the better of the chances and feel a bit aggrieved that you don’t come away with three points never mind just one.

“So credit to Solskjaer, credit to Manchester United.”

That’s a strong assessment on United after a 2-0 defeat.

Solskjaer certainly looks the complete opposite to José Mourinho after losing. The Portuguese would regularly throw players under the bus to take any responsibility away from his good self. And, of course, a win would be all about Mourinho and the great manager he is…

After the Arsenal game, Solskjaer was quick to look onto the next game, against Wolves in the FA Cup quarter-finals. The Norwegian has seen his side eliminate Reading, Arsenal and Chelsea thus far and will be hoping to add another Premier League side to the list before hopefully progressing into the semi-finals.