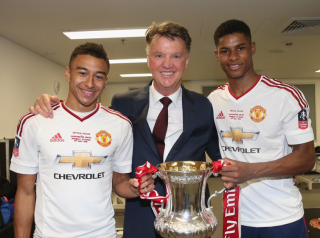 Louis van Gaal announced his retirement from football on Monday, three years on from being sacked by Manchester United.

But those he gave opportunities to at United haven’t forgotten their time under the Dutchman, who won the FA Cup before being replaced by José Mourinho.

Perhaps more entertaining off the pitch, Van Gaal’s United didn’t quite get us off our seats enough, playing pragmatic possession based football which could be best described as boring.

Van Gaal is responsible for signing Anthony Martial from AS Monaco and unleashing the French kid against Liverpool for his Premier League debut. He was one of few attacking players — like the rest mentioned in this article — that you feel appreciated Van Gaal more than others.

NEXT: Louis van Gaal retired – 4 funny moments from his time at Manchester United

The Dutchman also gave Marcus Rashford his big breakthrough in the first team at United. Yes, the potential was always there, but Van Gaal gave Rashers the platform to perform on the biggest stage. Of course, he’s not going to forget that.

Now looking forward to retirement, Van Gaal almost instantly became a fan of Jesse Lingard, when he decided to start him in the 2014/15 season opener against Newcastle. Unfortunately, Lingard got injured early on but the former boss stuck by his man, who played a key role in their 2016 FA Cup triumph.

Thanks for everything coach !! It was a honor to learn from you! 🙌🏾 pic.twitter.com/G1dYi1UJv0

Thank you for opening the door & trusting in me. Enjoy retirement boss 👌🏾 pic.twitter.com/OqrEodNlz0

I’ll never forget the trust you had in me. I owe you so much. Thank you, boss! pic.twitter.com/NravJEELxr