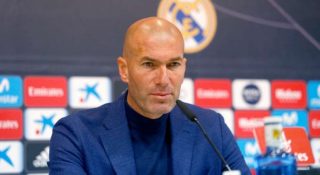 Zinedine Zidane has become the manager of Real Madrid again and it ends plenty of speculation about the Frenchman managing big clubs in other top leagues.

It was heavily reported at one stage that Zidane would replace José Mourinho as Manchester United manager, but that was before Ole Gunnar Solskjaer became caretaker boss and he has turned out to be quite a success.

Anyhow, talk died down and there were suggestions Zidane would return to Juventus, a club he spent five years at as a player, winning two Serie A titles as well as the UEFA Super Cup and Intercontinental Cup.

Return of The King (for Madrid…)

After deciding to leave his role as Real Madrid manager last year, on the back of beating Liverpool in the final to win a third consecutive Champions League as Los Blancos boss, Zidane is back.

During Monday’s press conference, he revealed that he received and rejected several offers from other clubs during his time off.

“I had several proposals, but I did not want to leave to other teams,” Zidane said, as per The Guardian. “I want to be here.”

Many will expect one of those offers to have come from Manchester United, but while we have it on good authority that there was a meeting between Zidane and executive vice-chairman Ed Woodward towards the start of this season, Tottenham Hotspur boss Mauricio Pochettino quickly became the front runner.

The details of that meeting are unknown but it never felt like Zidane was going to be offered the job when Mourinho finally got the sack.

However, The Mail did claim back in October that Zidane had reservations over taking the United job because he felt he didn’t need to test himself with a side not challenging for major trophies.

Another club that could have approached Zizou would be Chelsea, who still look likely to dismiss Maurizio Sarri at some point, though they’re still in contention for a top four finish and the Europa League under the Italian.

Juventus seemed most likely but you would have been foolish to rule out Madrid.

They’ve nothing left to play for this season, but the Real Madrid suits will still demand to be encouraged by a man who has already delivered so much success to the club both as a player and manager.

It only takes a run of defeats before questions are asked.