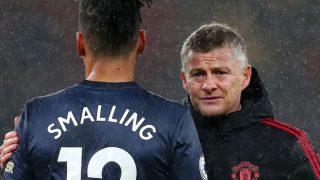 As the final whistle was blown at The Emirates a different kind of disappointment was felt than the last time United tasted defeat at Anfield in December.

With the club in disarray, Jose Mourinho’s United were handed a clear and comprehensive beating from our Red rivals in Merseyside. Something had to give.

NEXT: Louis van Gaal retired – 4 funny moments from his time at Manchester United

It has taken Ole ten league wins and two draws to get to this loss. Transforming the club along the way in a time frame many would have struggled with.

But here we are, fifth in the table, two points behind Arsenal and three behind Spurs.

Chelsea have a game in hand and if they win then it’s back to sixth.

The difference in the disappointment with Sunday’s game was that we really should have scored on more than one occasion.

Too many games under Mourinho drifted away without a fight or opportunity.

Romelu Lukaku will have to shoulder the blame for missing some absolute guilt edged opportunities. His recent deadly form before the Arsenal game of six goals in three games showed he had seized the chance given with the mounting injury list.

Unfortunately, it just was not his day on Sunday and he wasn’t alone.

United looked dangerous from all over the pitch against Arsenal despite not playing well for large parts of the game. It shows how far we have come and what direction the team is going. All United fans wanted was a team that could threaten and look a threat offensively.

Too many players had an off day at The Emirates and it was all in the attacking third.

Marcus Rashford seemed to be wearing David Bellion’s shooting boots, Paul Pogba showed flashes of brilliance but got lost in the game too often and Lukaku, as mentioned above, couldn’t take our best chances despite them being provided on a plate.

With that many attackers having a bad day at the office it really makes an already tough situation impossible.

Here we are though, in with a shout of the top four, FA Cup and a Champions League quarter final spot.

Sunday wasn’t about just losing it was the manner in which it was attained. An unusual shot from Xhaka and a contentious penalty are hardly anything to get down about.

It will be interesting to see how we bounce back. We did in spectacular fashion after the first leg defeat against PSG.

These moments really show you if United have evolved as much as we have seen so far.

The Reds can be a lot more optimistic than we were in December.

Solskjaer makes no excuses and his positive mindset has not only affected the players at the club and the fans but the overall feeling towards the club.

That is no mean feat.

The injury list has almost been forgotten with the wins during that tough period.

In a short space of time, Ole has not only shown he is tactically astute but also motivating a depleted squad beyond all expectations.

McTominay, Periera and Fred had almost been written off at the beginning of Solskjaer’s reign.

Those players have instantly changed all perception just in their combined performances in Paris.

Who would have thought Scott McTominay would play such an important role in stopping an attacking threat consisting of Veratti, Draxler, Di Maria and Mbappe? Certainly not after our defeat at the London Stadium earlier in the season. Andreas Pereira was remembered for his fatal mistake against Burnley costing us a goal. Weeks later he was given another chance against Southampton and took it. His goal spurred on our fight back and win. His energy, fight and discipline were greatly needed Wednesday night.

Fred really hasn’t settled in from the outset and often looked lost in a red shirt. Unfavored by the man that bought him to the club he also found Periera and Scott McTominay in front of him when Ole took over.

Thrust in to the team due to the injuries, his best performance came in an hour of need. Neat, tidy and calm passing in the second leg in Paris show a glimpse of what the Brazilian international can provide.

The mentality of these three players need to also be praised. All maligned during their time at the club at different parts of the season they have risen to the fore.

Our Norwegian manager deserves credit for that.

After the FA Cup game against Reading, a very poor performance from United, he said to MUTV: ‘I made it tough for us because when you make nine changes it is never easy for a team that has never played together so delighted that we are in the next round.’

How things have developed since then. In spite of the injuries it seems the players have risen to the challenge and embraced it. The squad is competitive again.

Sunday was disappointing, no doubt about it.

Let’s just look at the manner of that defeat and the bigger picture. Better times are already here and will improve and that’s exciting because the disappointment will soon wash away and Ole will still be at the wheel, tell me how good does that feel?