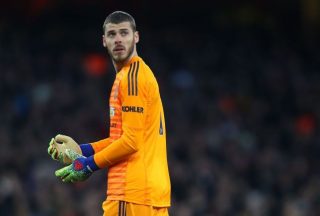 According to ESPN, Manchester United are trying to find a contract agreement with David de Gea and his entourage before the summer to avoid bids for the goalkeeper during the transfer window.

The club has been working on a long-term deal with De Gea for over a year now and there’s a fear now that the summer transfer window could throw more complications towards the job at hand.

Juventus, Paris Saint-Germain and Real Madrid have all been linked with De Gea in the past – and it wouldn’t surprise anyone if the Serie A giants looked to upgrade their goalkeeper in the coming months, especially if Juve thought De Gea was available.

While United have no intention of selling De Gea, the club would just like to finalise the deal to ensure the best keeper in world football commits to Old Trafford for the long-term future.

ESPN add that De Gea is keen to stay but only if the club can come up with the sort of money that reflects his importance at Old Trafford. After all, he’s won United’s player of the year award in four of the last five seasons.

United, however, are reportedly reluctant to make De Gea their highest paid player – a title currently owned by Alexis Sanchez – but still look an agreement can be met.

They’ve offered the Spain No.1 £350,000-a-week, which is more than enough, making De Gea the highest paid shot-stopper in the world at least. It’s bizarre that the two parties are still seeking a middle ground after that proposal was made.