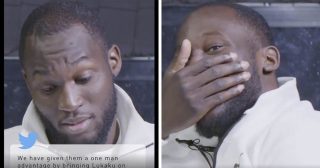 Try get under Romelu Lukaku’s skin, you won’t succeed.

Lukaku is probably used to the non-stop criticism at this stage, he doesn’t even flitch when reading some of the insults about him on Twitter.

You can’t please everyone in life, but more often than not Lukaku is on the scoresheet. While he was wasteful at the weekend against Arsenal, it’s clear his all round game has improved in recent weeks, and he also looks in better shape!

Nobody complained after the Belgian striker netted 6 goals in 3 games recently.

Check out this amusing clip filmed with PUMA, Lukaku’s sponsor.