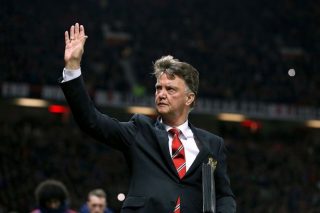 Louis van Gaal’s red and white army! Those were days when the manager of Manchester United probably provided more entertainment than his players on the pitch.

The standard of football over his two years at Old Trafford was woeful and it was painful to watch rivals play more expansive football than ourselves, and winning while doing so!

United finished fourth and fifth under Van Gaal’s tenure before he was replaced by José Mourinho. Just moments prior to getting sacked, the Dutchman’s side beat Crystal Palace at Wembley in the FA Cup final.

Three years on, Van Gaal has decided to retire from football management. It is understood that he had a number of offers during that time but will now enjoy retirement instead.

“I am a pensioner now,” Van Gaal told Dutch TV show VTBL, as quoted by The Mirror. “I have no ambition to be a technical director or a TV pundit.

“My wife Truus have up her job for me 22-years-ago, and followed me when I went abroad.

“I told her I would quit as a coach when I turned 55, but instead kept going until I was 65.

“She is entitled to have a life with me outside of football. I can say she is very happy.

“I think I could have worked as a technical director.

“But in this role you can’t attend training or say anything for fear it won’t suit the coach, directors or media. I don’t think I want a job like that.”

Here are three moments that made us laugh when Van Gaal managed United.

United were about to play FC Midtjylland in the Europa League, and Van Gaal was at his inappropriate best when addressing the media. The Reds were looking to overturn a 2-1 deficit from the first leg, so the boss wanted a bit more from his players when the Danes came to Old Trafford.

Oiled up at the end of season awards

As a result, he gave an entertaining performance that those in attendance won’t ever forget.

During his speech Van Gaal shouted “Hallo, Hallo, listen to the manager” in attempt to address the entire room. He went on to state that Ryan Giggs was always right and added that there was a lady who played the saxophone brilliantly.

It was random but funny at the same time, showing Van Gaal could have a laugh away from his boring football philosophy.

Side note: That same night he slapped Ryan Giggs on the back of his head for outbidding him during the charity auction.

Firstly, let’s sit back and try recall how many times we saw Van Gaal on the touchline during games… It didn’t happen very often!

But it was a moment to remember when he did.

Whilst complaining to the fourth official about Alexis Sanchez diving, Van Gaal threw himself to the floor like a child demanding more sweets at the local shop.

I don’t think I will ever get sick of listening to Van Gaal singing his own chant.

Sounding like Sloth from The Goonies, Van Gaal took a request from one United fan to sing “Louis van Gaal’s red and white army,” which frequently did the rounds at games when he was in charge.