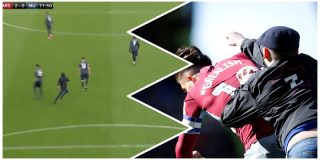 The behaviour of two football fans over the weekend was nothing short of disgraceful after Aston Villa’s Jack Grealish was attacked on the pitch before Manchester United defender Chris Smalling was confronted by an Arsenal supporter.

Now the PFA has called for a full inquiry into the matter.

Who in the right mind thinks it is acceptable to run onto a football pitch to endanger a player? That’s was my biggest question after watching the worrying events unfold.

While Smalling wasn’t attacked like Grealish, he still received contact from the moronic Arsenal supporter in question, while the Gunners celebrated their winning goal against United.

The Grealish incident was more serious with the Aston Villa captain stuck on the side of the head as he stood in Birmingham’s penalty area during the derby at St. Andrew’s.

However, the Villa man issued a perfect response by scoring the only goal of the game, securing three points for his team. He later stated it was the ‘best day of his life’ while the thug, named by West Midlands Police as 27-year-old Paul Mitchell, thought it was smart to invade the pitch to attack a professional.

To the Birmingham fans who lapped it up on Sunday, take a long hard look at yourselves. This shameful behaviour cannot continue and something needs to be done before another idiot strikes again.

Perhaps a point deduction would send a clear warning to other clubs and their fans. Those Birmingham fans who now think Mitchell is a legend would think the opposite if it costs their teams points in the league, then making it less likely to be repeated.

Footballers and fans alike shouldn’t feel in danger at a football match, and with knife crime on the rise, we’re lucky this wasn’t more serious.

But is that what it must come down to before we see proper action? I hope not.

Birmingham confirmed Mitchell would be banned for life from St. Andrew’s, though this calls for greater punishment. Let’s take it up a notch and ensure he is put behind bars for assault.

In a statement released before the Smalling incident, the PFA said: “The PFA condemns in the strongest possible terms the actions of the individual who has encroached on the field of play and attacked Aston Villa midfielder Jack Grealish.

“There needs to be a full inquiry into the incident to ascertain why in a fixture with such a charged history, a fan was able to run onto the pitch virtually unchallenged and assault a player.

“The PFA is concerned that we’ve seen elements of this type of behaviour coming back into the game, with several high-profile crowd related issues this season.

“Over the last few decades there has been a great improvement in matchday security, however incidents like this demonstrate certain problems have not been eradicated and that players can be particularly vulnerable.

“We must address issues of violence and player safety – this should include continued efforts with regards to education but be underpinned by strong punishments and sanctions.”

Arsenal released the following statement after the incident involving Smalling.

“We utterly condemn the behaviour of the individual who ran onto the pitch and approached Chris Smalling during today’s match. We would like to apologise to Chris and Manchester United, and are pleased that the individual was apprehended and arrested.”

We just want to see the appropriate action to tackle a worrying trend.