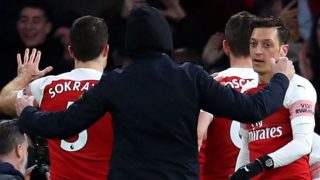 The fan responsible for invading the pitch and pushing Chris Smalling during Arsenal’s win over Manchester United has been charged with common assault.

This news comes shortly after Birmingham fan Paul Mitchell was given 14 weeks in prison for attacking Jack Grealish, who then went on to score the game’s only goal to secure three points for Aston Villa.

Gary Cooper, 30, not to be mistaken for 3, showed a degree of immaturity and idiocy as he ran on the pitch after Pierre-Emerick Aubameyang’s penalty doubled the Gunners’ lead over United.

Cooper goaded and pushed Smalling in the process, and has since been charged.

A Metropolitan Police statement said, as per The Mirror: “A man has been charged after an incident at the Emirates Stadium.

“Gary Cooper, 30 (10.07.1988) of Styventon Place, Chertsey, Surrey, was arrested on Sunday, 10 March, during a football match between Arsenal and Manchester United.

“He has been charged with common assault and going on to the playing area.

“He was bailed to Highbury Corner Magistrates Court on Friday, 26 March.”

We have already shared our thoughts on two pitch invasions over the weekend, here, but the Football Association says “a line has been crossed” in reference to players being attacked by fans in recent days.

The FA is working with clubs and the police to prevent such thuggery from taking place in our stadiums again.

“This weekend a line has been crossed in terms of fan behaviour,” an FA Spokesperson said, as per The Independent.

“On Sunday we saw two separate incidents, at Birmingham City and Arsenal, of individuals entering the field of play and assaulting players.

“Not only is it an offence to enter the pitch, which could result in a club ban and criminal charges for the individual, but it also puts the safety of the players at risk.

“This is entirely unacceptable and we strongly condemn both incidents.

“We will be working with the clubs, the leagues and the police to discuss what collectively needs to be done to protect players and officials on the pitch.

“In addition, we have written to both Birmingham City and Arsenal to seek their observations to examine the security measures they had in place.”

It’s good to see the authorities act quickly, but we can only tell over time if their methods prevent further incidents.