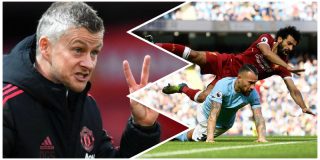 Ole Gunnar Solskjaer is living the dream but soon it will become reality once he is officially given the Manchester United job on a full-time basis.

It’s only a matter of time before it happens after watching the team improve significantly since the Norwegian arrived as caretaker boss in mid-December.

In the embargoed section of his press conference, Solskjaer said, as quoted by The Telegraph: “I think I have prepared all my life for this [management]. Ever since I was a kid, when I played computer games, I wrote out all the teams with my mates. They were good old times when I used to sign Zico, Maradona and Marco van Basten.

“I think I have secretly always wanted to do the job I am doing now. I probably believe more that I can be a football coach than a football player. It took me quite a few years to get to the level I wanted to be at as a player.”

When Solskjaer first took over we had little chance of finishing in the top four. At one stage, former manager José Mourinho called it a miracle, but Ole has faced every challenge with a wonderful attitude.

Even against PSG in the Champions League when nobody gave us a chance, Ole never made excuses about the injury crisis or going into the second leg losing 2-0 on aggregate. He believed in the players that were available and stunned the French champions.

“There has been and there definitely is a gap at the top of the Premier League. There is a top two and then we’re in the next four. We’ve got to close that gap. I don’t know how many points we are behind them because I don’t look at that. But we have to do things step by step because you can’t close it in one big gulp. We’ve got to keep looking at it.

“There’s absolutely no reason why Manchester United shouldn’t be the hardest-working team in the league. The things I always demand from the players are work rate, and attitude and fitness. So we need to keep working on the fitness and next season, the players know they will be asked if they want to challenge the top.

“That’s what you see from the top teams in the league, they run more than us. And that’s not acceptable really.”

If United keep improving and have a good summer in the transfer market, acquiring the right players to adjust to Solskjaer’s system, then we’ve a great chance of mounting a title challenge.

We had a poor summer in 2018 and Mourinho’s dour demeanour hardly helped matters, but now Solskjaer is aiming high to bring the Premier League trophy back where it belongs.