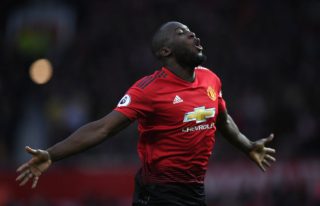 Romelu Lukaku is scoring for fun at the moment and is giving Ole Gunnar Solskjaer the most welcome of problems. Currently Red Rom is un-droppable. Marcus Rashford has become a permanent feature in the attack and Anthony Martial is close to a return to the first team. With Sanchez now out until well into the spring, it is likely that this three will spearhead the challenge for remainder of the season.

Balancing this forward-line alongside the midfield will now become a conundrum when Matic and Herrera return to fitness. Definitely first world problems as United now head into the stretch with two major trophies on offer as well as qualification for next seasons’s Champions League.

Lukaku is reaping the benefit from the number of chances the team are now creating and for his part, Romelu is reciprocating turning creator for his team-mates around him. When the team were not creating opportunities there was an under-current of anxiety amongst fans, concerned with his apparent lack of form. It was Lukaku who seemed to be an early make-weight as Rashford and Martial enjoyed regular starts in the United eleven.

With the recent spate of injuries, Rom has grabbed his chance and really injected momentum into the continued resurgence under Solskjaer. Sure there are still untidy moments where his first touch lets him down but make no mistake about it, he is a real handful for defenders whose close attention creates space for those around him. The fact is Romelu keeps scoring whether that be domestically or at international level with Belgium, he has become one of the most feared strikers in Europe and at 25, still has his best years in front of him.

Some fans have criticised his apparent lack of work rate and early in the season questions were being asked about his physique. It is a really tricky balance as a striker between the amount of exertion expended going forward versus the amount of effort involved tracking back trying to win the ball. Imbrahimovic, Berbatov, Tevez were not exactly famed for covering the hard yards but were able to let their goals do the talking.

The same is true of Lukaku and indeed it is perhaps a little rich to single out Romelu in a team that has for the last two seasons been amongst the lowest for distance covered during games. With regards to his weight, it definitely seemed in the first half of the season that Romalu had bulked up however this does look to be something that he has been working on and is if to emphatically answer his critics, he removed his shirt to celebrate his winning goal against Southampton.

With six goals in his last three games Rom is in a rich vein of form at exactly the right time. If the goals continue to flow, how does that affect the diamond formation behind him, will we see Rashford and Lukaku in a more fluid attack that alternates between whom leads from the front? As I say, nice problems for Solskjaer to have as we move towards the business end of the season which seemed to be promising so little in December but potentially now might culminate in the biggest prize of all. What a time to be alive.