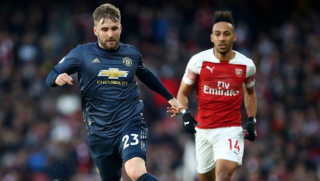 Not the result we wanted but our run had to come to an end at some point.

It was a game of fine margins when you put it all together. David de Gea made a rare mistake and Jon Moss gave a penalty when Alexandre Lacazette went to ground easily. At the other end, we hit the woodwork twice and weren’t clinical enough with many great chances.

You could say it was one of those days but while United dominated stages of the second half, we never looked aggressive enough. The sort of aggression you’d expect them to have against Arsenal was nowhere to be seen.

United were way too passive from the start and Ole Gunnar Solskjaer will likely put the result and performance down to cobwebs.

Hopefully, that is the case and we bounce back immediately with a win over Wolves in the FA Cup semi-final.

Here’s how United fans on Twitter reacted to the 2-0 loss to Arsenal.

Just a weird game. ‘One of those games’ is trite but… yeah. Decent performance for long spells, missed sitters and not quite clinical or sharp enough going forward. Weird first goal, super soft pen for the second. Tough one to take but nothing to panic about

Too many players off their game today and still the better team for the majority of this game.

Not concerned in the slightest to be honest. Just one of those days.#MUFC

Should have took our chances but we didn’t! Have ourselves to blame and that penalty was soft

Fuck knows how they’ve managed to beat us today, they’re absolutely shite. No point analysing that, just one of them days.

My thoughts on today’s loss against Arsenal

Not our day today, and weirdly I think a lot of us suspected as much before the game. Still, very frustrating.

In other news, Jon Moss needs to hit Specsavers and a treadmill ASAP.

Frustrating afternoon for United, undone by a goalkeeping mistake and poor refereeing

Time to concentrate on the Champions League 😂 #MUFC

Not our day today, still all to play for, we go again next match!! Very nice to see Mason Greenwood get some touches in the Premier League. #ARSMUN

Be prepared for a chorus of back pages tomorrow saying Ole isn’t good enough. I would still give him the Job even if we have a bumpy ride from here on in. He is #United .#MUFC

That’s a really hard one to take today but it’s important to remember the incredible run we’ve been on. From injuries to comebacks, we’ve put everything into the last 2 and a half months. Dust ourselves off and go again to get the top 4 spot we thought was impossible in December.