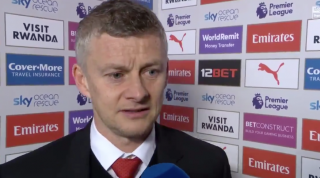 Manchester United were left to rue missed chances as they succumbed to their first defeat under Ole Gunnar Solskjaer in the Premier League.

Granit Xhaka’s first half swerving effort gave Arsenal the lead after a mystifying error of judgment from David De Gea. Pierre-Emerik Aubemeyang doubled Arsenal’s lead in the second half after a contentious penalty decision in which Alexandre Lacazette was deemed to be brought down by Fred in the eyes of referee Jon Moss.

NEXT: ‘I don’t think it’s a penalty’: Ashley Young unhappy after Arsenal defeat

Romelu Lukaku missed three golden opportunities to continue his goal-scoring form, against an Arsenal side who looked sharper and showed more aggression in the opening stages.

Solskjaer was left disappointed after his side failed to match their miraculous performance in Paris in midweek:

“We started slowly, maybe a backlash from Wednesday night, but we created chances and when they get the first goal it becomes a different game,” Solskjaer told Sky Sports, as per the BBC.

“We created so many more chances today than when we beat them in the FA Cup. Sometimes it happens, we hit the woodwork twice and had five very big chances ourselves. The referee will be disappointed when he sees it as I don’t think it is a penalty.

“We just had to go for it towards the end, but we were not really at it and it is one of those days where you have to dust yourselves down from. We have Wolves in the cup quarter-finals and it’s a big game to look forward to.”

Speaking about De Gea’s mistake in Xhaka’s opening goal, the Norwegian added: “David is disappointed every time he concedes a goal. The ball moves so strange and it looks like it goes to David’s left and it changed direction, but in the first 15, 20 minutes we were too slow and never put them under pressure.”

Ole Gunnar Solskjaer reacts to his first domestic defeat as @ManUtd manager, saying his side played better today than when they beat @Arsenal in the FA Cup.

United’s defeat at the Emirates end’s Solskjaer’s 12 game unbeaten run in the league. Arsenal’s victory leapfrogs them above United into fourth, two points ahead of Solskjaer’s side.

The Reds face Wolves on Saturday in the FA Cup quarter final, before the international break.