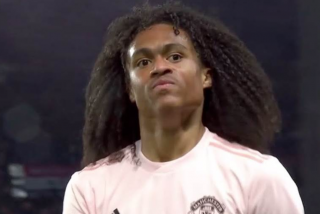 Marouane Fellaini has been replaced.

Tahith Chong has an impressive hairstyle that probably should hamper him from playing football unless tied up, but that has not go in the way of the Netherlands youngster making a Champions League Round of 16 appearance against Paris Saint-Germain during the week.

United finished the memorable comeback with three teenagers on the pitch, including 17-year-old Chong, giving the youth at the club unmatchable experience in most cases.

At Chelsea, you see young players come and go because they don’t see where their opportunities in the first-team will come. That’s the market foreign leagues such as the Bundesliga are trying to crack into, with Jadon Sancho proving to be a success at Borussia Dortmund, and Bayern Munich’s ongoing attempts to sign Callum Hudson-Odoi.

Jesse Lingard returned to training this week and is still recovering from injury, but he had a chance to catch up with a few of the lads that were delighted to be part of a memorable night for Manchester United in Paris.

He was left feeling slightly confused by Chong’s hairstyle…

Sharing a photo of himself posing with Chong and Angel Gomes, Lingard wrote: “They’re hungry, humble and wanna learn and thats whats most important. But im just confused as to how chongy plays with his hair in his eyes n mount n all at. but its lit though. #BreedEm #Youth

They’re hungry, humble and wanna learn and thats whats most important 📖 But im just confused as to how chongy plays with his hair in his eyes n mouth n alll at 🤔 but its lit though 🔥 #BreedEm #Youth pic.twitter.com/L1pawOB6ri

You can only imagine how annoying it must be to have hair in and around your eyes, nose and mouth.

However, it doesn’t seem to get in the way of Chong’s game as he continues to develop into a fine player.

At least he possess greater footballing ability than Fellaini, right?