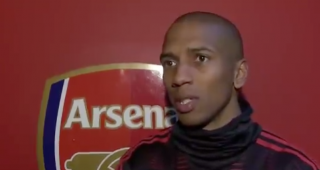 Ashley Young was left frustrated after Manchester United were defeated 2-0 by Arsenal at the Emirates.

United missed a hatful of opportunities in the game, and were given a harsh penalty against them after Fred was judged to have brought down Alex Lacazette in the box.

“Disappointing especially when you create so many chances. On another day we take those chances and we could be two or three up at half-time. Against top teams you get punished,” United’s captain told the BBC.

“From where I was I don’t think it’s a penalty,” he added.

“I know the character and team spirit we have. We’ve turned things around – where we were in October we’d have taken where we are now, but as a club we should be pushing higher up the league.

Arsenal took the lead in the first half after Xhaka’s long-range strike was not dealt with by David De Gea. The home side’s lead was doubled when Pierre-Emerik Aubemeyang converted the penalty awarded by referee Jon Moss.

The defeat was United’s first in the league since the sacking of Jose Mourinho in December, ending a 12 game unbeaten run.

United now sit fifth in the table after being leapfrogged by today’s opponents into fourth.  The Reds face Wolves at Molineux next weekend ahead of the upcoming international break.

Ashley Young’s interview with MUTV below.