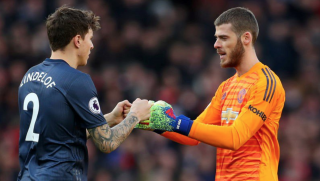 Arsenal dealt Solskjaer a second defeat in a key encounter in North London. With a days extra rest, United looked laboured in a game where high profile mistakes cost them dear. This surprise loss hands over the initiative to Arsenal, who do not have to face any more top four rivals in the run-in to the end of the season.

An uncharacteristic howler today from David handed Arsenal the lead after a speculative effort from Xhaka caught him well and truly wrong-footed, beating him to the right with a swerving shot. United never really recovered from this early gaff that handed the momentum to Arsenal.

Arsenal sought to expose the right-back, much of their play focussed on the left channel and Ashley didn’t look phased.  Didn’t really put a foot wrong in a game where others made the mistakes.

Marking his 200th Premier League appearance, Chris put in a solid performance today and had Aubameyang in his pocket. Forging a really strong partnership with Lindelof there was further evidence today that these two may solve the headache with the pairing at the heart of the defence. Was singled out by an Arsenal fan marauding on the pitch, which following on from today’s disgraceful scenes at Birmingham will doubtless see the Gunners sanctioned by the FA.

As I say, developing a real understanding with Smalling and continuing to improve under Solskjaer. Looked comfortable throughout the game and will consider himself unlucky to be on the losing end of this one.

Rarely troubled again and showed why he looks like he will own the left-back spot for some time to come. Maybe was not as prominent in an attacking sense today but from a defensive point of view did little wrong.

Building on his confidence from Paris, Fred give further glimpses of what he is all about. He was unlucky in the first half hitting the post with a long-range effort that had Leno well beaten. However a naive challenge against Lacazette in the penalty box, when the Arsenal striker was well covered, was a dagger blow to United’s chances in this pivotal match in the battle for fourth. The resulting penalty put the game beyond United.

Again playing in a more advanced role Dalot showed that he was happy taking on players and not afraid to take a shot on goal. Slightly worrying that in 50/50 balls he was often second best but there is definitely a lot more to come from this precocious teenager. Was substituted in the second half when the game was running away from United.

Struggled in the first half, missed quite a few tackles and in retrospect probably not the best game to ease himself back in after injury,  especially after a strong performance from McTominay mid-week. Gave the ball away in the penalty box mid-way through the second half and was lucky not to get punished. Ultimately substituted for Greenwood, this was Solkjaer’s easiest decision of the match.

Restricted to a long range effort in the first half and was in and out of the game in phases. Was guilty of ruining Ramsay’s hairdo when the Welsh international seemed to over-elaborate after a challenge from the French wizard. Not able to carry over his form from his recent renaissance and didn’t threaten in the second half.

A tough game for Marcus today who had little joy in front of goal, a wayward effort in the first half was followed by a somewhat frustrated penalty appeal. Things didn’t improve in the second half, a dangerous free kick position was wasted to the sound of jeers in the Emirates. This was one of Rashford’s most forgettable performances in a United shirt, a tame injury time header into the grateful hands of Leno merely underlined the point.

Missed a great chance early on when he hit a shot into the ground which hit the crossbar, which could have changed the course of the game. Failed to round keeper towards the end first half which typified a disappointing opening 45 for the United attack. The second half offered little for a striker who never produced  the threat he posed in France.

Had little influence on a game where United failed to deliver from the channels.

Did not have an opportunity to warrant rating.