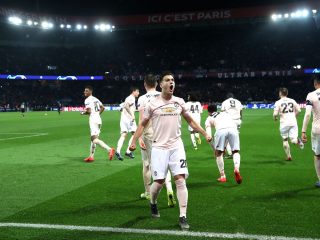 Diogo Dalot shares our view that David de Gea has cemented his place as the best goalkeeper in the world.

It’s a common opinion to have around these parts as De Gea continues to do the unimaginable between the sticks.

Dalot, who has recently come back into the side, is a big fan and must enjoy knowing the best goalkeeper around is behind him when he plays at right-back.

The 19-year-old impressed in recent outings against Crystal Palace, Southampton and Paris Saint-Germain.

He believes part of United’s improvement of late comes down to De Gea.

“I think he can show to the world that he’s the best goalkeeper in the world,” Dalot said, as per The Express.

“To have the opportunity to play with him, it’s amazing and it’s unique for me.”

Dalot continues by explaining why he didn’t feature at the beginning of the season, shortly after joining United from FC Porto.

“It was hard because I got injured. It was my first two injuries that I had in my short career so far.

“When you get it in this time, it was hard because I wanted to play and I was coming to a new club, new teammates, new country.

“But I think it was very good with this staff, with this club, they helped me a lot.

“It’s been a fantastic year for me in terms of experience and game time, because I just started playing 2-3 months ago, gained full fitness.

“To have all the appearances that I have and to make some good games, I think it’s going to be a good season at the end.”

It certainly looks like it will be a strong end to the season, especially if United win today away to Arsenal. That would push United closer towards cementing a top four spot, and we’re still in the FA Cup and Champions League.

For the new additions like Fred and Dalot, it’s important to get them winning silverware early on in attempt to change the mentality in the dressing room, which has already improved.

The difference under Ole Gunnar Solskaer is truly exceptional. He believes in each of his players and isn’t afraid to throw the less experienced players into big games.