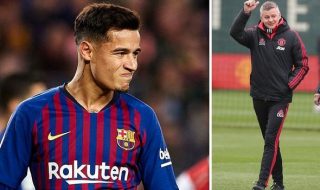 Talk of Philippe Coutinho joining Manchester United has done the rounds for quite some time now, but a report from the Sunday Mirror suggests the Brazilian has been looking into the idea of switching Camp Nou for Old Trafford.

Coutinho hasn’t done terribly at Barcelona but expectations were high when he left Liverpool as a star player over a year ago. He is not a fans’ favourite in Catalonia like he was in the Premier League.

The Mirror claims Coutinho has told friends about how difficult it’s been to settle in Barcelona and is alleged to have spoken with a number of Manchester United players about a potential £100 million transfer.

While Liverpool could do with a player like Coutinho, it’s unlikely that he will be move back there, especially after negotiations took a turn for the worst with the Scousers feeling a tad betrayed but there was nothing they could do when Barça came knocking.

The Mirror adds that Coutinho’s preferred destination would be Manchester United. A piece of information that won’t please Liverpool fans who once adored him.

But does the £100 million represent any value for a player who has not met expectations at the very top?

United already have a creative force in Paul Pogba, one of the very best, and while Coutinho may help relieve pressure in the final third he isn’t the only solution.

Whether Coutinho truly wants to join United or not, if we’re looking to sign a player of this ilk why not go get Paulo Dybala?

The Argentine is a better player than Coutinho.

Photo from The Express.