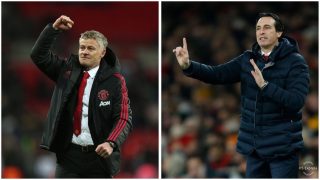 Perfect timing for a trip to The Emirates. Manchester United are flying and Arsenal just suffered an embarrassing loss away to Ligue 1 fodder Rennes.

Arsenal’s season could be over this time next week if United win on Sunday and they get knocked out of the Europa League to Rennes. Champions League football slipping away.

Unai Emery needs to dig deep and find a way to break down United, something the Spaniard has already failed to do this season as Arsenal crashed out of the FA Cup.

United are strong away from home and turned around their Champions League tie with French champions PSG by beating Thomas Tuchel’s side 3-1 in Paris on Wednesday night.

Hopefully, Arsenal will suffer humiliation for a second time this week, which will see them slip four points adrift of United in fourth.

The Gunners are without Lucas Torreira after his red card in the North London Derby. This is the first of a three-game suspension for the feisty Uruguayan and they are certain to miss him in the middle.

Torreira gives Arsenal a bit of edge — but nowhere near enough to disguise their weak streak.

Arsenal, a team weak in many departments, look so vulnerable at times and can be prone to crumbling when it matters. Defeat this weekend will set them up for a big collapse.

Solskjaer has been given a boost with Ander Herrera, Anthony Martial, Nemanja Matic and Jesse Lingard returning to training on Friday. Given how our fringe players have performed in recent weeks there shouldn’t be a need to rush any of these lads back, unless they’re 100 per cent.

The manager witnessed some of the biggest battles between United and Arsenal as a player and will expect his team to show the same level of hunger.

Arsenal are hurt at the moment, probably feeling sorry for themselves, so we should really aim to kick them while they’re down.

I’m confident about a good win for United.