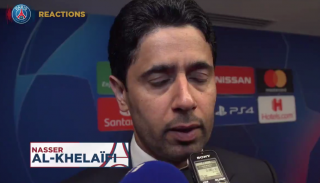 PSG president Nasser Al Khelaifi has thrown his toys out of the pram by insisting the final result between Manchester United and the French champions was unfair.

Aw, bless his cotton socks. Shall we request a replay from Uefa?

The home side in Paris were beaten 3-1, with United qualifying for the Champions League quarter-finals, a stage in the competition PSG have yet to reach.

They won the first leg 2-0 at Old Trafford and were clear favourites to progress going into the second leg. United were resilient and PSG were unable to finish the job.

Romelu Lukaku netted a brace and a stoppage time penalty won the game, thanks to Marcus Rashford, who had balls of steel to put it away.

Speaking after the match, Al Khelaifi was upset about the result, claiming United didn’t deserve to progress to the next round. He also said the result was ‘ridiculous’.

“We had a lot of opportunities,” the PSG president told L’Equipe. “And there, without opportunity, without anything, there is this second goal of Manchester. And there, it’s as if everyone said to themselves: ‘They have two goals while they do not attack.’

“We controlled the game, it was a totally ridiculous result.

“I never felt that Manchester United was coming to win. But hey, they did it so congratulations for that but… I do not know if the season is ruined. I do not know.

“I trust the coach. We will see his decision, if he wants to change or if he does not change. But it’s not because we have lost a match that we have to act now. We must make decisions with a cool head.”

While claiming to have a cool head, he doesn’t really. This is the epitome of a knee-jerk reaction fuelled by anger.

PSG have never reached the quarter-finals of the Champions League before and these excuses shouldn’t fool fans. People were talking about them winning it outright at half-time last night, now look…