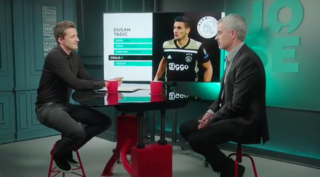 ‘On the Touchline with Jose Mourinho’ is to be aired in full later on Thursday, but the Portuguese coach hailed his former team’s 3-1 win in Paris as they booked their place in the Champions League quarter-finals.

Mourinho can say anything about United and it will grab headlines, but this time he’s not looking to take a shot at his former club. He was also impressed with Ajax’s final result against Real Madrid, winning the second leg 4-1 at the Bernabeu.

“[Ajax] were not afraid to play at the Bernabeu, the young guys, they showed great attitude, they put the needle in the wound,” Mourinho told RT.

Jose Mourinho says #ManchesterUnited’s stunning #ChampionsLeague last 16 win at #PSG was “phenomenal,” as he spoke to RT for the first episode of his new show with the channel #UCL #ManUtd #ManU #MUFC #Mourinho #Football #Sport

Mourinho was also asked about returning to management, with a view to do so this summer.

He was sacked by United in December and replaced by Ole Gunnar Solskjaer.

There’s a good chance he will return to Real Madrid as manager, but with the club in crisis mode he will have a huge challenge on his hands.

Los Blancos are as good as finished for the season now – out of the Champions League and La Liga title race.