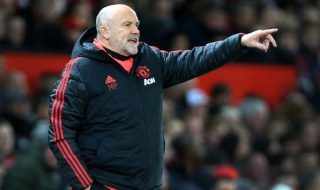 Mike Phelan is not just a great coach, he could probably run Manchester United’s official Twitter account too if he wanted…

His tweet after the game was arguably the best of the night after beating Paris Saint-Germain 3-1 in the second leg of their last 16 Champions League clash. It proved enough to secure a place in the quarter-finals of the competition, so celebrations took place at full-time.

Phelan claims to have had 180 missed calls on his phone after the game.

The assistant coach tweeted: ‘180 (missed calls) can’t understand the fuss? Some of us have been here before.’

180 (missed calls) 😳 can’t understand the fuss? Some of us have been here before pic.twitter.com/xsbH1y5S2u

PSG were a big hurdle to jump but we’re past that now and looking forward to the draw for the quarter-finals. Looking at the rest of the teams still involved in the competition, it’s no wonder so many people are saying it’s an open Champions League.

A decent draw in the next round and who knows? United could be on the brink of an amazing season with Ole Gunnar Solskjaer at the wheel.