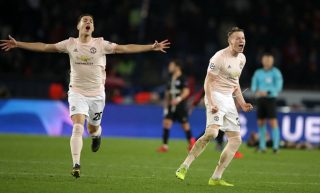 In a wonderful article by Paul Hirst of The Times, we gather insight into Manchester United’s celebrations after knocking Paris Saint-Germain out of the Champions League.

The players were heard singing chants in the dressing room after the match, tributes to manager Ole Gunnar Solskjaer and Eric Cantona, so their achievement probably won’t fully sink in until this morning.

I love hearing stories like these especially with the likes of Sir Alex Ferguson, Patrice Evra and Paul Pogba joining the players and staff in the dressing room for celebrations. It was the biggest night of Solskjaer’s managerial career to date and a huge result in Manchester United history.

Even without 10 players for the game, Solskjaer believed in those he had available.

Scott McTominay, for one, has done tremendously in Nemanja Matc’s absence and last night he was up against the world-class Marco Verratti. Fred had probably his best game in a United shirt, partnered by Andreas Pereira, who looked dangerous from wide areas.

However, there is reason for concern as The Times reveals McTominay was spotted lay slumped on the turf, 25-yards back from his teammates celebrating with the away fans:

The euphoria had started on the pitch, of course. As soon as the final whistle went, some United players stopped and shook hands with their defeated PSG counterparts. Others, like Luke Shaw and Andreas Pereira, ran straight over to the 2,200 away fans at the other end of the pitch. Pereira leapt over the advertising boards and past a group of photographers before removing his pink United shirt and flinging it high into the crowd. About 25 yards behind him Scott McTominay lay slumped on the turf. He had either injured himself sprinting towards the away end or cramp had kicked in just before he had arrived at the advertising hoardings. In a bizarre moment, Gomes did not see the midfielder and ended up falling over his team-mate before picking himself up. A staff member then hoisted McTominay to his feet so he could get closer to the fans and thank them for the support.

It is not known if McTominay was injured or if cramp had kicked in after playing the full match, but Solskjaer didn’t mention it in any of his post-match interviews. The Scotland international will be in line to start against Arsenal on Sunday if fit.

United are light enough as it is in midfield. The last thing we need now is another midfielder to be ruled out when there are so little options.