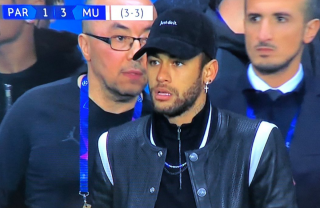 The Brazilian superstar went on a foul-mouthed rant about referees that is likely to land him in a bit of bother with Uefa.

PSG were without their main star for both legs due to injury, but he would have hoped his presence in Paris could see his teammates over the line.

Neymar’s hopes of playing in the Champions League quarter-finals this season were killed when Marcus Rashford scored a winning penalty in stoppage time.

This photo screams ‘get me out of here!’ pic.twitter.com/5wpkv7g4Ro

The French champions were punished for a handball committed by Presnel Kimpembe, but United had initially been given a corner. That was until VAR got a second look at Diogo Dalot’s blocked effort on goal, only to see the ball strike the defender’s arm.

“This is a disgrace, they out four people that know nothing about football in charge of looking at the replay for VAR,” Neymar ranted, as per The Independent.

“There is no penalty. How can it be a handball when it hits his back?! Go f**k yourselves!”

To be fair to stroppy Neymar, if he gets a chance to look at the incident again, he might just see where the ball actually hits.

His little tantrum shows PSG were too confident and perhaps dismissive of United. Let’s have a little at to ourselves about that and look forward to the draw for the quarter-finals.