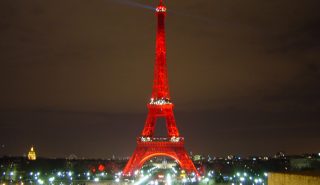 In case you were living under a rock for the since Wednesday or before, then you will know what happened. Only football can do this, only sport writes tales that a Hollywood producer would reject for being too far-fetched.

Three weeks ago at Old Trafford PSG popped the Ole bubble inflicting his first defeat and giving the club a mountain to climb to stay in Europe. After the game, Ole Gunner Solskjaer said “Mountains are there to be climbed” in his post-match interview.

In fairness to Ole, he spoke with confidence and never once made an excuse in his pre-match press conferences, he had the easy cop-outs of injuries/suspensions, but he chose to be positive and it spread throughout the players and fans.

Fans descended on Paris with hope and no expectation, determined to enjoy the game and the sights and beverages that the French capital had to offer. United’s always stunning away support travelled in their numbers as always and looking at social media before the game, Paris became awash with red.

The team news was what most people expect with three at the back as this was all that was available to Ole, Bailly in instead of Dalot raised a few eyebrows but I felt they should go out and enjoy the experience.

When Romelu Lukaku scored in the first few minutes suddenly you felt there was something happening here and maybe just maybe this could become possible. PSG beat Barcelona 4-0 in the first leg but lost 5-1 in Spain to lose one of the all-time great knockout ties a couple of years ago, so they had form and United asked the question of PSG.

PSG equalised through Juan Bernat and the dream seemed to be shattered, but up stepped Romelu Lukaku to score his 6th goal in 3 games following up on a Marcus Rashford shot spilt by Gianluigi Buffon. Disappointment then went to elation and growing belief, half time came, and it seemed I would have to break out the top shelf alcohol as 45 minutes more would require something stronger.

Now I would love to talk you through the second half, but it is mostly a blur, nerves every time PSG came close to our box and especially when Kylian Mbappe got the ball. United stayed in the game with ten minutes left which all the fans would have taken before kick-off.

Mason Greenwood and Tahith Chong came on as United went for it, they pushed forward wary that they had to go for it but also leave huge spaces that PSG could counter into. Then step forward VAR, a moment which most fans watching would have missed but was spotted then checked by the referee and in the moments every United fan aged about 10-years in a matter of minutes.

When he gave the penalty, I fell to my knees thinking we had done it but as my dad said to me as we watched it, he has to score it. PSG players did their best to protest and put Rashford off, but the 21-year-old dispatched it and sent every fan into raptures.

This is why we all follow the game, to walk out of Old Trafford 3 weeks ago seemingly resigned to losing the tie to winning it in the most Manchester United of ways. Backs against the wall with obstacles in our way but lead by youth and belief they climbed the mountain and the view was worth it.

These kinds of moments are woven into the fabric of this club, memories of winning in Madrid in 1968 with Billy Foulkes scoring the goal to complete an impossible comeback. Then to 1984 and after losing 2-0 to Barcelona, United lead by Captain Marvel himself Bryan Robson scoring two and Frank Stapleton completing an improbable comeback.

Then to 1999 and 3 magic minutes in Barcelona to turn the Champions League final against Bayern Munich, Teddy Sheringham and Ole Gunner Solskjaer scoring the winner and twenty years later he masterminded another comeback.

Great moments come from great opportunity, sometimes it is the hope that kills but not with this club. Hope springs eternal as this club doesn’t give up and always fights, in future years fans will ask where did you watch the game in Paris?

For any fans lucky enough to be there in that away end and have memories and emotions throughout the day that a week’s worth of all the Soaps on TV combined couldn’t touch. The away fans did us all proud and let’s be honest they reacted as they should when witnessing a historic point in their lives.

No words. Just take it all in. Manchester United. pic.twitter.com/hz09qkTMBu

People wonder why football fans go to games and travel the country and the world for this game and why we wake up at stupid times to watch and follow our teams. We spend our hard-earned money and give our time for moments like this, but some people say it is just a game and to those people feel sorry for as they won’t experience nights like these.

Reactions from current players and ex-players summed up how we all felt in that moment, elation where we lost all control and only football delivers that. Sir Alex Ferguson was watching from the stands and he would have let out a beaming smile watching one of his former players and young lads he has known since they were kids and some of them still are, making history and changing their lives forever.

I don’t advocate gambling, but I had a few pounds on United winning the game and the tie mostly because I am a fan and believe in the impossible but so many fans did too so there must have been something in the air yesterday. There will sore heads and voices worldwide today and I honestly have not stopped smiling since.

This club defies belief and logic, but this is why we love it so much, I could talk about stats, tactics and history but to tell you the truth all that can be done in the next few days. Dreams become reality and football always delivers, Ole inspires confidence not only in his players but to us as fans and he deserves to write his own contract after that.

To sum up last night in words is virtually impossible as words are powerful but for last night, they don’t quite do it justice, instead listen to reactions, read social media and watch videos and highlights of the game. You never get these kinds of highs watching Coronation Street or EastEnders, that night will be remembered and be the subject of documentaries in future years and will form the basis of stories across the world.

Some fans can remember the night in Madrid in 68, some remember Barcelona at home in 84 or the treble season in 99. Moscow and Stockholm have been venues for European triumphs in recent years, but we now add Paris to the list of places that the very mention of its name will conjure up memories of a special night and hold a special place for every fan who went or watched it unfold.

Those players lived a dream we all have had, and they gave their all to get through, some players were written off or derided by myself and other fans. But now is not the time for agendas or point scoring, it is about basking in this result and another night that will never be forgotten.