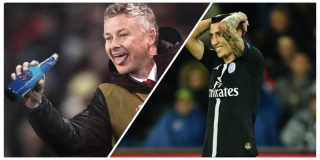 Angel Di Maria created two assists against Manchester United in the first leg at Old Trafford and made sure to celebrate in front of the home fans, who were booing him throughout the game.

It was said at the time that the former United player had the last laugh by causing PSG’s opponents so much trouble in the final third to give his side an advantage ahead of the second leg.

NEXT: Man Utd coach reacts to PSG win with tweet of the night

However, things didn’t go to plan for the Ligue 1 champions, as they said goodbye to European football for another year after suffering a 3-1 defeat against the Reds. Marcus Rashford’s late penalty put the nail in the coffin.

After his antics in the first leg, United fans made sure they didn’t miss the opportunity to have one last laugh at Di Maria, as seen in the tweets below, but Romelu Lukaku also made sure to celebrate Rashford’s late winner by running towards the PSG attacker.

There is no love lost between the two parties after his underwhelming spell as a United player, which lasted just one season before he moved to the French capital.

Shout out to Di Maria, he knew they’d bottle it. What a snake. pic.twitter.com/jJ0Wf4cYff

Childish but Di Maria after the carry on at Old Trafford 😂🤣🤣🤣

Angel Di Maria and bottles. A match made in heaven pic.twitter.com/6rNknXiV1D

To Angel Di Maria, From Paris with Love! pic.twitter.com/Ly4Kur62Ad