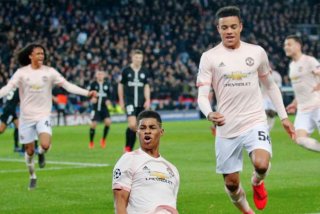 What a night in Paris. One of the greatest comebacks in Champions League history.

After a disappointing first leg at Old Trafford, losing 2-0, Paris Saint-Germain had the upper hand. Then United were hit with an injury crisis and had Paul Pogba suspended for the second leg. Nobody gave us a chance except for Ole Gunnar Solskjaer.

He believed in his players and had three teenagers on the pitch at full-time in what was the greatest result of his managerial career to date.

Just when you think you’ve seen it all, VAR turns the game on its head by rewarding a penalty in United’s favour in the dying minutes. Marcus Rashford then adding to the scoring after a first-half brace by Romelu Lukaku.

Here is how United fans reacted to the result on Twitter.

You wouldn’t swap this for the world, would you #OleOleOleOle

Like crack, smack, acid and e all mixed. 𝘕𝘰𝘵𝘩𝘪𝘯𝘨 on earth.

So many fantastic performances, but tell you what, coming on during the game, Diogo Dalot, not even 20 for a few weeks, was incredible. One we can thank Jose for, that. Looks huge potential, strong, brave, back and forth and helps win us the penalty. Get in lad!

Offer Ole and his coaches the jobs full time. He’s had 17 games, won 14, drawn two and lost one. MUFC have won every away games under him. He’s earned it. And send his wife some flowers for looking after their 3 kids while he works away in sunnier climes. Ole’s at the wheel!

I LOVE THIS CLUB!