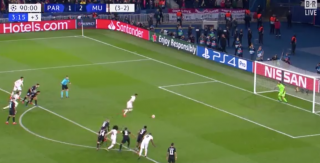 Marcus Rashford’s late penalty has secured one of the most amazing comebacks in Champions League history.

The penalty was awarded after Diogo Dalot’s goalbound shot was handballed by a PSG defender.

The incident went to VAR and the referee controversially gave United the chance to win 3-1 which was enough to take them through on away goals.

Rashford was calm under the most severe pressure, smashing the ball past Gianluigi Buffon into the roof of the net.

Earlier, Romelu Lukaku had given United the glimmer of hope they needed with a first-half double. The Belgian became the first player since Cristiano Ronaldo to score two goals in three consecutive United games.