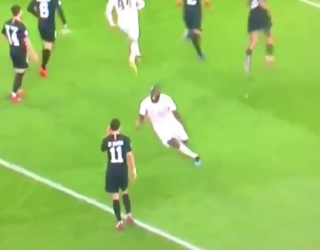 It has been a crazy night in Paris. Manchester United did the unthinkable and are now through the Champions League quarter-finals.

Emotions were all over the place as the game reached stoppage time.

United had just won a corner and were ready to take it until the referee called for VAR. Diogo Dalot’s strike which won the corner-kick took a deflection of the arm of a PSG player, so we were rewarded a penalty.

With Paul Pogba ruled out after receiving two yellow cards in the first leg, Marcus Rashford stood up to take the match-winning penalty to knock PSG out of Europe.

Footage has just emerged of Romelu Lukaku celebrating the goal by running towards Angel Di Maria, who acted an imbecile at Old Trafford on his return, before quickly returning to his teammates.

Lukaku celebrated Rashford’s penalty in front of Di Maria. I love it. 🐍🐍🐍🐍pic.twitter.com/INcDA7bIAL

I would have done the exact same – but more obvious and aggressive.