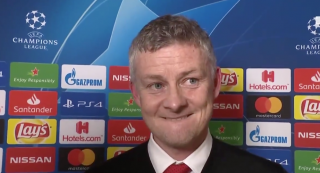 Marcus Rashford’s penalty in added time secured the famous win, as United go through to the Champions League quarter-finals on away goals.

United soaked up constant PSG pressure throughout, as the home side having over 70% of ball possession, but failed to convert their dominance into goals as United’s defence dug deep.

Solskjaer was without ten first team players tonight, but huge credit must be given to his players who still managed to overturn PSG’s seemingly unassailable 2-0 first leg lead.

If Solskjaer had not done enough to be awarded the manager’s job before, it is now inconceivable that the Norwegian won’t now be named permanent boss after the most incredible United comeback in Paris.

Check out Solksjaer’s thoughts below: