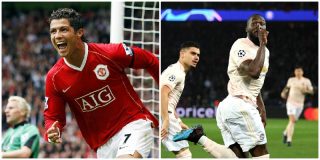 Romelu Lukaku has become the first player to score two goals in three consecutive games for Manchester United since the great Cristiano Ronaldo in 2006.

Lukaku’s two first half strikes against PSG at the Parc des Princes follow braces in the league securing crucial victories over Crystal Palace and Southampton.

NEXT: Loads of MUFC fans react to ‘shambolic’; Eric Bailly performance against PSG

The Belgian pounced on a rare Gianluigi Buffon mistake to give United the lead in the first half, after the Italian legend spilled Marcus Rashford’s dipping effort.

Lukaku is finding his form under Ole Gunnar Solksjaer, and is performing on the biggest of stages for United tonight.

Considering United have had some great strikers since Ronaldo’s record, including the likes of club record goal-scorer Wayne Rooney and Robin Van Persie, the feat achieved by Lukaku must not be underestimated.