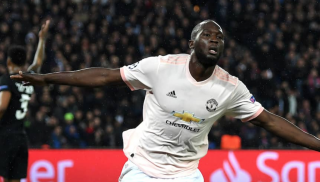 Goodness. What a night. Manchester United – making the Impossible Possible. And how. Ole’s at the wheel!! One of THE great European nights saw United overturn a seemingly insurmountable deficit to progress through to the Champions League quarter finals on away goals. With the tie in the balance and Ole Gunnar Solskjaer’s Reds needing another to knock out strongly fancied PSG… step forward Marcus Rashford. A late, late penalty put the seal on a night right up there with the best of them. Here are our Player Ratings.

Made two good saves, but nothing you wouldn’t expect him to. Despite PSG’s pressure, it was actually a relatively comfortable night for the Spaniard. There was nothing he could have done about the PSG goal.

The whole Eric Bailly thing, it could not work. It was a mess, a shambles. It was a lost 35 minutes in which Bailly was all at sea…but I don’t know how much was his fault. Solskjaer made a mistake playing him there in the first place. Was subbed before half-time for the second time this season. A walking disaster.

Welcome to the weird world of Chris Smalling. We live in a world where he can struggle against Southampton but then hold his own against PSG and one of the best players on the planet. The best of the backline. Did well.

Came under the cosh like all of his defensive cohorts as United were forced to withstand an onslaught having gone ahead. Reverted back to his usual calm and composed self after half-time. Did well.

Shaw struggled early on but after United stemmed the early bleeding, they were a lot more comfortable but PSG got a lot of joy down the flanks. Shaw was up against PSG speedster Kylian Mbappe, and was left exposed on occasions. Overall, his game picked up and he came on strong in the second half.

Got ripped to pieces by Juan Bernat and Julian Draxler as United came under siege in the first half an hour. He and Bailly failed to protect each other but, to his credit, he looked better having reverted to his more familiar position with Diogo Dalot further forward. Careless in possession but grew as the tie went on.

Really impressed with McTominay again. Loads of energy and snapping at the heels of PSG players whenever they got the ball. Jury is still out as to whether he can truly be a United player, but if guts have anything to do with it, he’s got a good chance. Credit where it’s due – courageous, full of heart and stood strong.

Played at a good tempo, looked good on the ball, tackled well and pressed effectively. The best half of his fledgling Old Trafford career so far. On a big night for many of United’s fringe players, the Reds £52m Brazilian stepped up. Could still have a Man Utd career.

Quietly went about his business. On a night when United’s supporting cast took centre stage in the city of love, Pereira further endeared himself to Reds fans with another sold showing. Another who has been questioned but again showed he might be coming of age.

A constant menace as he led the charge on the counter-attack. Had to drop back quite a bit to help out defensively, but did so diligently. Will go down in United folklore for his late penalty. With that moment, came the perfect script. United did what no one thought possible, all thanks to the intervention of one of our own..

Scored a brace for the third game in a row, becoming the first United player since Ronaldo in 2006 to do so. Six in three now as he dispelled the notion that he’s merely a flat-track bully. Looks noticeably leaner and meaner to rediscover his best form under Ole. Never mind that the second goal in particular was a gift, he worked hard, caused problems and led the line well. Even his first touch was on point. Excellent.

Everything Bailly wasn’t. Quick, direct, diligent both going forward and defensively. Should have started.

What a moment for the 19 year old as he came on in the dying moments for Pereira. He made his Champions League debut in the Parc des Princes for a night he will never forget.

Made no impact but goodness, what a moment for the highly-rated 17 year old. Became United’s youngest ever Champions League player.