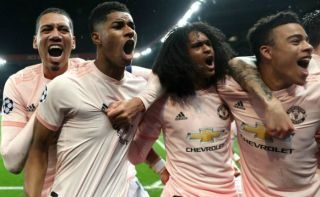 Mason Greenwood made his Manchester United debut in amazing circumstances as United secured a stunning comeback victory over PSG at the Parc des Princes.

The highly rated 17-year-old came on with just minutes left, but was on the pitch to witness Marcus Rashford fire home the winning penalty late on.

Greenwood was one of five United academy graduates who featured in Paris tonight, including Scott McTominay, Andreas Pereira, Tahith Chong, and of course match-winner Rashford.

The striker becomes the youngest United player ever to appear in the Champions league at 17 years and 156 days, breaking the record held by Gerard Pique, now of Barcelona.

The experience will be one Greenwood will never forget, in a result that will go down as one of the greatest comebacks in Champions League history.

Gomes with Chong and Greenwood in the dressing room [ig] #MUFC pic.twitter.com/zP18oPBbIA