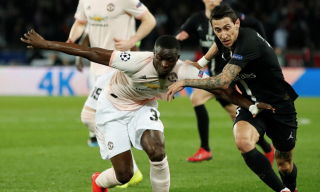 Eric Bailly has been brought off midway through the first-half in Manchester United’s second leg against PSG at the Parc de Princes.

Bailly came off injured in place of Diogo Dalot, who many fans would have liked to see in the original starting 11 after his impressive cameo against Southampton on Saturday.

In truth, Bailly looked completely out of depth in a five man defence selected by Ole Gunnar Solskjaer. Bailly and Ashley Young have been constantly targeted down United’s right; Angel Di Maria and Juan Bernat have caused havoc with United’s defence at all at sea at times.

The Ivorian completely switched off at the back post for PSG’s leveller, with Juan Bernat sneaking in to easily finish past a helpless David De Gea.

Unbelievably though, United lead thanks to two goals from Romelu Lukaku and now just require one more unanswered goal to go through on away goals.

Many United fans have singled out Bailly for his display.

Eric Bailly needs to come off before this gets out of control. Dalot the obvious replacement. Ivorian played Mbappe on for the goal, but before that, #PSG were bypassing him with ease. #MUFC

The whole Eric Bailly thing, it could not work. It was a mess, a shambles. It was a lost 35 minutes from Bailly…but I don't know how much was his fault. 🔴⚫⚪ #MUFC #UCL

Great half from United! We need to get at that PSG right back more. He’s had the worst right back performance I’ve seen since Eric Bailly.

Diogo Dalot is on for the woeful Eric Bailly. I reckon he'll be sacked on the spot for this performance. #PSG #MUFC ⚽🇫🇷🏴󠁧󠁢󠁥󠁮󠁧󠁿
Credit: Football__tweets

Amazing that Man Utd are 2-1 up, as Eric Bailly looks so lost at right back that someone is going to have show him how to find the tunnel at half time!

The was the absolute worst and most lazy defending I’ve ever seen by Eric Bailly. Walking out like he’s back on the block. Then turns and WALKS towards goal like he’s got no one around him. If I was Ole I would have straight yanked him out and replaced him with literally anyone