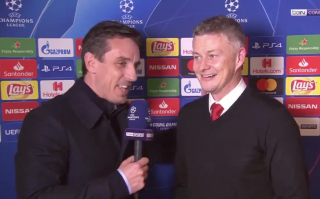 Gary Neville was delighted to get a few minutes with Ole Gunnar Solskjaer at the end tonight.

Manchester United had just completed the impossible task against Paris Saint-Germain by overturning the tie, despite losing the first leg 2-0 at Old Trafford.

Solskjaer’s ex-teammate quizzes the United manager and intentionally putting him on the spot.

You just know by Solskjaer’s reaction to Neville that he feels uncomfortable asked about getting the job on a full-time basis. He surely knows now the job is his but maybe he prefers to keep his head in the zone, take game-by-game, and do his best until an announcement is made?

Neville conducts the interview like any United fan would. Priceless stuff.

Watch the interview below.

This might be the best interview I’ll ever watch pic.twitter.com/krP65mbqys