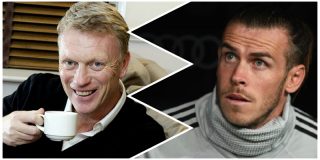 Former Manchester United manager David Moyes has revealed he failed to sign Gareth Bale in 2013 because the Wales star had his heart set on joining Real Madrid instead.

It was Moyes’ only summer at the club with one signing made. Marouane Fellaini arrived to reunite with the Scottish manager, with the pair working closely together at Everton, but this was after being linked with players such as Cesc Fabregas and Thiago Alcantara.

NEXT: Arsenal without star man for Man Utd clash as fight for top four heats up

And now Moyse has confirmed his desire to sign Bale six-years ago.

“I wanted him to be my first signing at Manchester,”  Moyes told eirSport over the weekend. “We came close, spoke to him, but he had his heart set on Real Madrid and we couldn’t talk him out of it.

“It was a real disappointment because I saw him as a Manchester United type player.

“He carries himself well, I think he’s a terrific player. He can play wide, he can play as a striker now that he’s developed that.

“I just think all round he’s a terrific athlete and a brilliant footballer so I think that he would have fitted what we wanted but I couldn’t talk him out of it.”

“I wanted him to be my first signing at Manchester United, we came close”

Bale is back in the news this week following comments made by his agent Jonathan Barnett, who launched a scathing attack on Real Madrid fans, saying their treatment of his client is “nothing short of a disgrace,” as reported by Sky Sports.

The former Tottenham attacker was jeered by the home crowd on Saturday when replaced by Marco Asensio during Madrid’s second defeat to rivals Barcelona in four days. Tension will be on the rise now that they were knocked out of the Champions League by Ajax on Tuesday, losing 4-1 at the Santiago Bernabeu.

And, to add to Bale’s pain at the moment, he landed awkwardly on his ankle against the Dutch giants and had to be replaced.

United fans can expect the see a reoccurrence of the annual ‘Bale to United’ stories which pop up every summer.

Truth be told, the thought of Ed Woodward falling for such a move frightens the life out of me. Bale is too injury prone and would have been a good signing 2+ years ago. Not now.

That ship has sailed.