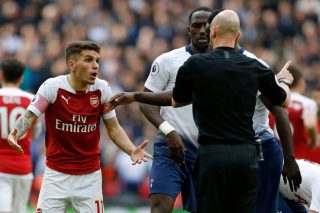 Arsenal will be without Lucas Torreira for their crunch clash with Manchester United after their appeal against his red card was rejected, as reported by Sky Sports.

Torreira was sent for an early shower for a late challenge on Danny Rose in the 1-1 draw with Tottenham Hotspur on Saturday.

NEXT: Paul Pogba responds to claims he had bust-up with Romelu Lukaku

Arsenal boss Unai Emery somehow thought there would be a way to appeal the decision so that the Uruguayan could feature against United.

Even if unintentional, it was a late challenge, high with studs shown. The referee has to look out for the safety of all players on the pitch and Rose was lucky to escape the tackle without a serious injury.

Was it a sending off? 🤔 pic.twitter.com/iGVTFIzCHx

Torreira now faces a three-match suspension. He will also miss games against Newcastle and Everton, but Sunday’s game could be huge in the race for the top four.

Ole Gunnar Solskjaer has only been United manager for over two months and has already come away from the Emirates with a win, in the FA Cup. His squad has been hit with an injury crisis but the approach will remain the same.

According to The Sun, Alexis Sanchez, Ander Herrera, Jesse Lingard, Juan Mata and Antonio Valencia are all out injured, while Nemanja Matic and Anthony Martial will take late fitness tests.