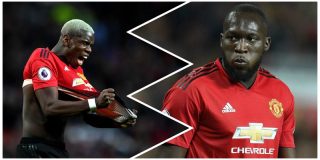 Romelu Lukaku isn’t happy and it might have something to do with a recent story in The Sun claiming he had a bust-up with teammate Paul Pogba on Saturday after the Frenchman missed a late penalty in Manchester United’s 3-2 win over Southampton.

The story tries to make an issue out of the fact Lukaku was on a hat-trick when Pogba stood up to take the penalty, only to miss the opportunity to increase United’s lead.

There was no sign of a bust up or tension between the players on the pitch at the time, even Lukaku addressed the situation in a post-match interview.

“I am a striker and I wanted Paul Pogba to score the penalty, he has been on a good run but he has been an important player for us,” Lukaku told BBC Sport. “I was happy to let Paul take the shot.

“I was focused on the win and help my team-mates, that is the most important thing, not always me scoring. The manager gave me another chance today and I was able to take that chance.

“We have to look one game at a time and are working hard on the training ground. We are ready for the challenge.”

But that wasn’t enough to put the story to bed… The Sun would later state that both players had a bust-up after the match.

He responded to the story on Twitter, writing: “When the hate don’t work they start telling lies…”

When the hate don’t work they start telling lies…