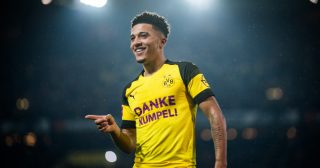 According to the Telegraph, United are ready to compete with Paris Saint-Germain for the coveted English forward. The report suggests the club would be willing to make the 18-year-old their first £100m plus signing, with Dortmund looking to make a huge return on the player they signed from Man City for just £8m.

If United were to sign Sancho, it would likely solve the issue on the right-flank, and provide a perfect replacement for Alexis Sanchez who looks set to depart Old Trafford this summer.

Ole Gunnar Solskjaer today confirmed Sanchez will be ruled out for ‘four to six weeks’, as per the BBC, after sustaining a knee problem in Saturday’s victory over Southampton.

Sancho could line-up in a front three alongside Anthony Martial and Marcus Rashford next season. Unsurprisingly, the links to the teenage winger are exciting a host of Reds on social media.

However, some United fans are wary that of the extortionate price tag Dortmund will inevitably demand, and the club already has youngsters Angel Gomes and Tahith Chong in their ranks.

Jadon Sancho looks like a real talent. Worth every bit of £100 million. Incredible vision for a young player. 👏🏻 #mufc pic.twitter.com/lRcRdobedm

Jadon Sancho would be a great signing at any price, he’s a special talent.

Defenders would be terrified 🔥

Jadon Sancho would be a class signing for Man Utd, but it would mean the end for Tahith Chong. Spending £100m on a RW will probably make Chong realise that, at 19, he’ll be better off playing regularly elsewhere. He might decide that anyway, even without Sancho being signed!

If these Jadon Sancho reports are true….then I'm sooo looking forward to next season!

Jadon Sancho on right 😎Martial on the left with Rashford up top😍 Pogba just behind ahh imagine the link up play & goals scored Ohhhhh yesss. Make it happen Woodward 🤣 #MUFC

I know there's a lot of talk about Jadon Sancho at the moment, but I think United's next big thing is currently sat on the bench..Angel Gomes.. I think that kid has the potential to be something else! #mufc

If the chance comes I'm 100% Sancho in.. Fans bleating too much money like it's their own, yet wanted us spend over £100 million bring back Ronaldo who might have give us 2/3 seasons. Said it before. Martial, Rashford and Sancho could be scary.

Just on the Sancho rumours, I think £100m is a fair price. Given his age, current performance level, potential, and number of years he could play for a club, it makes perfect sense. #MUFC

Personally, I dont want Jadon Sancho in Man utd.
I think he is OVERHYPED.
And for 100M?
U kidding me? #MUFC

2 seasons at Dortmund before making a move would be great https://t.co/oAOFIgDdkw

The last two Dortmund players we got all won the player of the season for Dortmund before coming over. Miki and kagawa. We got nothing out of them. Anybody can look good in the bundesliga i mean, look at keita. We don't need Sancho and surely not for £100m.Chong is better!#MUFC