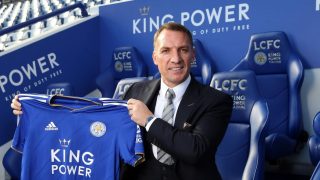 The Premier League’s very own David Brent has returned to replace Claude Puel as Leicester City manager. The Foxes were beaten by Watford at the weekend in Brendan Rodgers’ first game in charge, conceding in stoppage time thanks to an Andre Gray goal.

With an England international at centre-back, Rodgers knows the club will always face a test to keep Harry Mcguire, a key member of the Three Lions who reached the World Cup semi-finals last summer.

During that period, Manchester United were considering a move for the former Sheffield United defender but a deal never materialised.

Mcguire has since signed a new contract with Leicester, but they mean very little in terms of loyalty nowadays. Contracts mean nothing more than a pay rise if you’re lucky.

Rodgers admits United could try to inquire about Maguire in the summer, however, he is not worried about the rumours at this point as his aim is to rebuild the team using every asset he’s got.

“They may well come in,” Rodgers said, as quoted by the Leicester Mercury. “But it doesn’t worry me. I think all you can worry about is that you make the team the very best they can be.

“You always have to be prepared for that moment as a club. It happens but at this moment in time, I’m thinking about the team, and making it the best that we can.”

After impressing at Hull City, Maguire got his move to the King Power Stadium where he’s become an even better defender. He might be an upgrade on what we have in defence – apart from Victor Lindelof – but United need a world-class acquisition like Napoli’s Kalidou Koulibaly.

A strange time for Rodgers to mention United links. There hasn’t been a lot about it in the media until now!