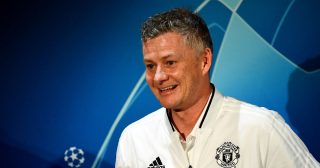 PSG looked comfortable in their victory at Old Trafford, with United struggling to cope with the likes of Angel Di Maria and Kylian Mbappe, while rarely threatening going forward themselves.

However Solskjaer, who was reminded that no other team in United’s position have progressed in 106 years of European competition, refused to rule out his side’s chances.

“It’s never mission impossible,” said Solskjaer as per the Mail. “Of course, it’s more difficult. We have got to get the first goal and then anything can happen. Goals always change games. If we get the first one, we’ll be believing even more and they might start doubting. But it’s important we get the first one.

“We’ll never approach any game as a lost cause. The outside pressure is off and everyone expects us to go out easily, but that doesn’t happen with Man United players. Our pride was hurt the last time we played them so you’re going to see players who will give their all. Let’s hope PSG underperform.

“When no-one believes in you there’s always that little bit of character we have to show ourselves. Making history is the motivation, it’s going through. These players are not used to losing. They were not happy with how we lost the home game, and at our best we can match them.”

Despite Solskjaer’s optimism, United are travelling with a depleted squad to the Parc des Princes, with teenagers Tahith Chong, James Garner, Angel Gomes, Mason Greenwood and Brandon Williams all included.

Though it is not as if United haven’t produced stunning performances in Europe before, and Solskjaer recognised other results in recent years similar to what his side require to go through.

“Everyone knows we’ve done it,’ he said. “The results in the Champions League the past few years have been strange – last year Juventus and Real Madrid and we all remember PSG and Barcelona – so there are many examples of teams that can change results like this.

“We as a club have done it so many times. The players have been fantastic away from home, and we’ve beaten Tottenham, Arsenal and Chelsea.”

The second leg against the French giants represents the first test in a hugely challenging week for United, who also face Arsenal at the Emirates on Sunday with both sides aiming for Champions League qualification.