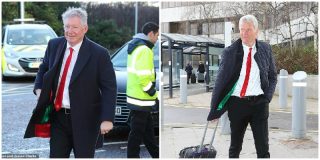 Manchester United face an uphill climb to comeback from a two-goal deficit against Paris Saint-Germain in the second leg of their last 16 Champions League tie.

You could say anything is possible with this rejuvenated United side under Ole Gunnar Solskjaer, but the caretaker manager has up to 10 players missing for the clash with Paul Pogba suspended and after an injury crisis hit the squad, effecting several key players.

NEXT: Four candidates to become the next Man Utd captain

It’s a big ask for the lads but it’s great to see Sir Alex Ferguson and David Gill back travelling with the squad ahead of a big night for European football, as reported by the Daily Mail.

Perhaps this is a good omen as we seek the comeback spirit of 1999.

We’ve not seen the heights reached under Fergie and Gill’s stewardship since the pair left their positions as manager and chief executive in 2013. Together they worked closely and kept the ship steady to a remarkable extent.

It was only the following season after their exit that we truly recognised Gill’s work with Ferguson. Ed Woodward became executive vice-chairman, a role he was oblivious to, and it was going to take time.

Woodward is still far from ideal and has seen three managerial appointments under his reign fired. Two of those were his appointments, though he signed off on all three.

Solskjaer has a press conference later today and there will probably be more questions about Fergie travelling with the squad and if it means he will invited into the dressing room to speak to the players before the match.

Those questions were asked before United took on Liverpool at Old Trafford two weeks ago, however, a pre-match briefing from Fergie was never confirmed by the club.

Imagine the faces on all the young lads – Mason Greenwood, Brandon Williams, Tahith Chong, Angel Gomes, James Garner – when they heard or saw Fergie getting on the flight, completely unaware that they would be in the company of the greatest manager of all-time so soon after being involved with the first team.

The 20-man squad in full, as per the Manchester Evening News.